Props to, like, the entire league sans myself and Rich for scoring double digit NFL Pick'em scores this week. That means Dave and Amy/Carrie notched double doubles. Cain scored 12, so it's time for a collective moan, since he's on top again.

Now on to my random NFL weekend thoughts...


I thought the idea of alternate uniforms was a sell more merch. 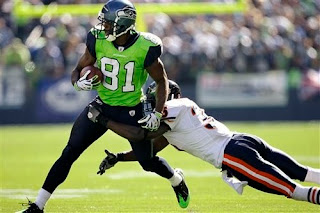 
Brett Favre pulled out some late game heroics. I'm not saying that it wasn't an awesome play, but I've gone on record with the two following wishes for Favre:
1. He succeeds big time and wins a Super Bowl. Brett Favre is the greatest story of the year and cements himself as the greatest QB of all time... no question.
2. This year is a fantastic failure for Favre and he embarrasses himself into permanent retirement.

I honestly want one of those two things to happen. Whichever does, I will be a very happy sports fan. If anything in between happens, this will be a disappointing year.

So where does this past week's last second TD throw put him in my two dream scenarios? Nowhere. Talk to me half way through the season. Right now we are queued up for another crappy Favre season like last year with the Jets.

Here is that play.


Looks like Pennington is out for the season... expect to see a whole lot more Wildcat. I'm indifferent... the Dolphins are on TheFerm's banned list.