7:15AM: Any attempts to get any more sleep are futile with kids chatting.

8:15AM: Amanda heads off to some we-help-you-cook-your-food-and-you-bring-it-home-and-freeze-it pyramid scheme party thing. Now it is just me, this one, this one, and football.

8:52AM: Wrapped up getting the living room set up. Madison used a squirt bottle to "clean" one of my TVs. Now the controls don't work. Sweet.

9:01AM: Ollie beats me out of the room (since I have to do some post wiping cleanup), grabs the remote, and changes the channel. So much keeping my spot paused on ESPN. 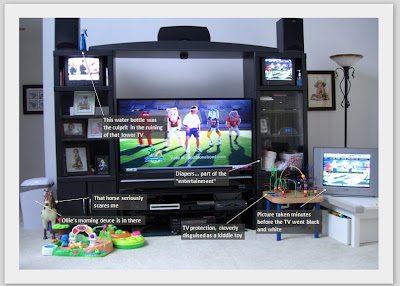 The Scene
9:02AM: Gameday starts slightly late. I'm greeted with the same crappy, barely retooled Collage Gameday intro. WTF is up with that thing?! I don't want any tings in my tang tang, thank you very much. If all Disney Sports can get is irrelevant music stars, can't they still do better? I miss Bubba Sparxxx.

He put that hat on... makes me proud
9:15AM: Irrelevant was probably a little harsh. Mr. Big and Mr. Rich are icons to rednecks and tweeners everywhere. I saw that one that seems to have more talent on a CMT reality show. If he wasn't called Big before, he should be the one called Big now. He said he would kill for country... not kill *for* his country... kill for country. We'll just assume he's Big, even if that other guy thinks he all Big.

9:37AM: Off to start prepping some afternoon "tailgate" food.

11:58AM: TV Update: I have Penn St./Syracuse (on card) on my main TV , North Carolina/Connecticut (on card) on the TV Maddie broke earlier (now it's a black & white TV apparently), Iowa/Iowa St. (on card) on one small TV, and Florida/Troy on the other small TV. I haven't watched much of anything... may reshuffle. 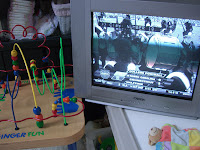 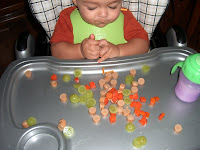 1:28PM: #19 North Carolina could be in trouble... and I'm watching a Billy Mays commercial. I miss that guy. Too bad he had an affinity for the cocaína.

1:40PM: Time for a beer update. I just polished off a Real Ale Full Moon Pale Rye. Before that it was a Magic Hat #9. Before that... Magic Hat Roxy Rolles Autumn Amber.

1:43PM: Why the bleep doesn't Comcast offer ESPNU in HD?!

2:27PM: Central Michigan upsets Michigan State (-15) 29-27 in the final seconds!! Too bad that wasn't on the card. North Carolina, who was on the card, came back to take care of business. Too bad I was on the wrong side of that pick. Card has been updated. 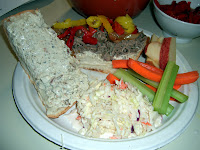 6:46PM: Getting geared up for the USC/tOSU game. LSU/Vandy, NASCAR, and South Carolina/UGA also tuned on the televisions.

My evening updates slowed dramatically because I was putting together the video above and an even better one that I'll post when it finishes uploading.

8:30PM: Now is as good of a time as ever to point out the new scoreboards I added to the left column of the blog. The formatting isn't perfect, but they are generated and updated automatically, so I am willing to deal with the unwanted text that shows up. The number on the left is the overall Pick'em points and the number on the right is the current week's scores. I'll have it do a resort after the week is over, but leave it unsorted as scores are updated so you can see how you did relative to your closest competitors.

Enjoy my video of the script Ohio before this weekend's USC/tOSU game. I suggest you watch the whole thing, so you can soak in the awesomeness of the script Ohio. But, if the thought makes you dry heave a little, skip to about the 2:45 mark. I can't get enough of this video.


OTHER ITEMS FROM AROUND THE INTERNETS: 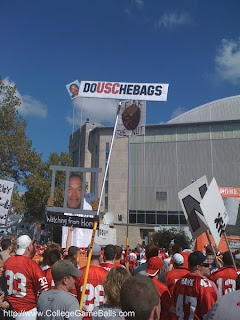 Click to enlarge. Don't miss the O.J. sign
My favorite Pammy of the week:
"I gotta think that the USC Trojans are going to eat that one out."- Ray Bentley

Would Barkley still be considered the greatest freshman ever if tOSU had scored on that last drive? I don't think so. The fact is, USC played better as a team and Barkley didn't lose the game for them. On the other side of the field, who is ready to have that "Terrelle Pryor is not the next VY, he's better than VY" conversation. VY would have won that game. If you disagree, lets go put the film on bro.
(for the record, I think Pryor is a better quarterback, but not better when it comes to what counts: winning... at least on the college level. In some ways, not even close)