By SirRon December 06, 2008
here is the play at home version, with three people chasing Cain, but each 5 points away at press time.

10:26PM update: oh Bob *sigh*... I just noticed that you picked Missouri... and here I've been all excited about your perfect card.

10:44PM update: I would NOT want to be playing the sooners right now... damn... nice job running up the score late in the game though, bobby... that's class.

the next day update: (did anyone really stay up for the Hawaii game) Bob misses the last two games of the NCAA regular season after getting his last 13 correct.

Curtis and Amy/Carrie split 2nd place in the NCAA Contest (5% of total pot each, unless you guys agree to a tiebreaker) 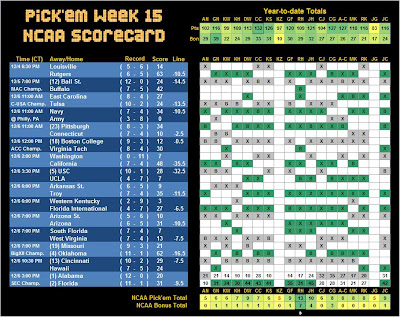