The Week That Is:
Combo post this week. Below are your scorecard links to follow along as the action unfolds.


NFL Sunday Afternoon Kickoffs
Tim Tebow > Kansas City Chiefs. Tim threw 2 passes, but it's all about the W baby. Elongated throwing motion // Tim Tebow > Cam Newton? I'm not saying, I'm just saying the Panthers lost to the Titans today. Not good. // Vick lost again. You know you like that. // The Texans don't seem to need Mario Williams. If they re-sign that bum, one or two of you in this league will have to hear my drunken Mario rant at a bar this off-season. // Two of you guys were up on the Seahawk win over the Ravens. I'm going to need to see you in the commissioners office. // Dallas kicked ass. So what's the truth? Bills = pretenders or Cowboys = for real. // Atlanta beat themselves in OT. Who dat anyway. // Former Longhorn Colt lost again... because of former Longhorn Phil Dawson's missed FG. I can't take all this losing!1! // I've Googled Andy Dalton before. Seriously, I don't know why I can't remember who this guy is. If you Google him now, the top link is that he threw two picks in the 4th to give Pittsburgh the win.

We got a fight in the Chicago/Detroit game!


The NY Giants really don't move the needle for me, but this picture is one of the best sad fan picture I have ever seen. 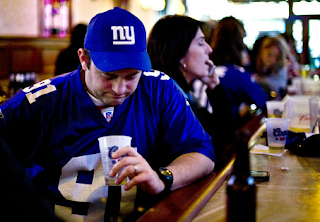 The no joke quote of the week:

“Thirty-seven points on the best defense in the league, s**k my d**k,” - Bill Belichick 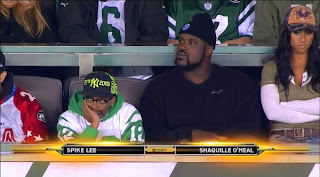 
NCAA Early Kickoffs
What I watched: Texas almost needing to use people from the stands to field a team. The docs and trainers are going to be busy tonight. I'm sick. No literally. Wish I was drinking an Independence Brewing Oklahoma Suks, then I'd feel a little better.
What I wish I watched: Wake/Clemson on ESPNU.
Some Live Thoughts: While the Clemson game didn't make the card or the peripheral TVs, I switched over to the 28-28 game right after Texas lost. As I'm typing, Florida-South Carolina and Nebraska* (I'd rather not mention those despicable* mthrfkrs in State College... all of 'em*) are also within 1 score with only a few minutes remaining. Wake just lost to #9 Clemson on a last second field goal with enough time to catch the last 30 seconds of the Nebraska game. Nebraska wins by 3. The line was 3.5. WTF corn! South Carolina just took care of biz against Florida. Missed that pick. Just flipped to Michigan St.-Iowa. The Spartans are in victory formation... 37-21. Oh goodie... missed that pick too. Earlier, Okie lite dropped 66 on Tech. Here is something: Since scoring a TD to go up 31-7 on OU three weeks ago, Texas Tech has been outscored 190-43.
I'm 1-5 after the early games conclude. Gig'em Baby (AP) is 5-5. Horns down, thumbs up, dude.

*Both of those links are must reads.

NCAA Midday Kickoffs
What I watched: The Longhorn Network is free this week. That's pretty much all I've been watching. (OK, I also watched Texas A&M do their double digit lead blowing thang.)
What I wish I watched: If you think I wasn't glued to that, you are crazy. Well, actually I switched over to watch this:

I don't really have anything against Boise (even if I did get all Schadenfreude-y when a field goal cost them a BCS Bowl for the 2nd straight year), but this opens the door for the University of Houston to get a BCS bid. I think they'll get smoked if they play someone good, but that'll just be win-win for me (Win: the hometown guys get some attention, Win: they can shut their mouths after a 30+ point loss to any decent team). College Gameday is coming to Houston next week. Nice.
Some Live Thoughts: No "live look-ins" this time. The 4OT aggie game had my attention and I just opened my first beer. Hopefully it agrees with those night-strength meds I took a while back.

NCAA Late Kickoffs
What I watched: The anti-LSU/Bama, Oregon/Stanford. Seriously, I intended to watch this game, but instead I checked out that UFC fight on Fox. Those 64 seconds were, uhhh, fun? So Fox lost their UFC virginity, it only lasted a minute, and it wasn't at all satisfying? That sounds about right. Do you know why college football is better than sex? Because it lasts longer.
What I wish I watched: The Marquez/Pacquiao fight. I hear Pacquiao won pretty decisively.
Some "Live" Thoughts: I spent the later part of the night playing ps3. Don't judge, I still had games on. Apparently 'Bama missed a couple more field goals. Ugh. Western Kentucky managed to put 9 up on LSU. And, I didn't see this until Sunday, but check this bleep out. Sick.


NCAA Pick'em Scorecard
Chumlee's Banditos may have had another double digit performance (ho hum), but Devil Dawgs (DD) is are weekly winner with 12 of 15 correct picks. Props to ANo, CG, JN, and KSh, who also got dubs this week.
Pickem-Football.com 2011 Week 11 NCAA Card (v1.0)


NCAA Pick'em Leaderboard
I don't care what you say, spell check. *I* say leaderboard is a word.

It is probably about time to admit that this is a race for the 2nd place prize. WhooDat4Life (Lo) and Dirt Burglars (D2) made a move into the #2 slot, but ten or more teams probably still have a shot. Good luck pimps (and by "good luck," I mean I don't care because it's not me that has a shot :).
ncaa nfl results