What is the statute of limitations on National Championships?

By J.R. Ewing - September 07, 2012
So I think most people that follow any media source has seen this linked, Texas A&M is now a 3x National Champion, and likewise raised their Big 12 title ring count by 200% to 3.  How does this happen?

The photo tells it all (before up, after below). 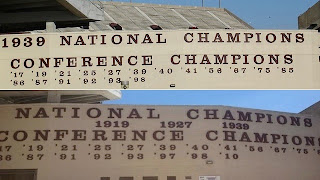 I won't rehash the semantics of the two National Titles (read the above article, Harvard has some claims to one of them).  I'm sure Alabama wholeheartedly endorses these, as Pre-Hitler titles now total six for the two schools (hey, that's more than Texas, that's cool).  The SEC will probably adjust their total (for current schools) to further their world domination argument.

The conference title grab is laughable (also in the above article, but worth repeating).  The 1997 Big XII title includes the "Conference Title Game" in which Nebraska defeated them "54-15" (was 40-3 after 3 quarters).  So I guess the title game was more of a mere inconvenience as all participants get to claim titles.  I have some sympathy for the 2010 Aggies, they got the 2008 Longhorns treatment, by having Oklahoma (who they had beat) play Nebraska (who they had beat) for the Conference Title having not made South Championship due to a 3-way tiebreaker, although the BCS rank wasn't in this one, overall record was, their extra loss in an admirable out of conference loss to Arkansas was the difference.  Although taking ties in division titles whatever the tiebreaker would have meant 5 conference champs that year.

I'm still deciding whether it's more fun to make fun of Aggie after they've left the Big XII or not.

BTW, if it were up to me, I think Texas should vacate the 1970 title, lost to Notre Dame in the Cotton Bowl.  It wasn't a real national championship and waters down the three unbelievably dominant undefeated seasons of 1963, 1969, and 2005.
aggies Alabama Big 12 humor longhorns sec