Point summaries for Week 8:
The top and the bottom of the league look a little different this week. Jess' mighty 11 vaulted him 3 spots to take the lead from Justin, who scored one less than last week with 7. Amanda got tired of being at the bottom and sent in a card with 13 of 15 winners. Nice! That was enough to drop Gary to the rear and also move reigning champ Cain down a spot to 2nd to last.

* Gary called his own number and then scored 7... he *should* get negative bonus points for that...


THE AGGIES DID IT!! They won in Lubbock for the first time since 1995 or 1993 or whatever it was (I'm too lazy to look it up). How did they do it, you ask? I have no idea. The game had no TV coverage what-so-ever. Baylor called, they want their Big 12 media status back.


Arkansas shot their wad, I said it.

The Big 12 North is straight up garbage. EDSBS.com notes that K-State could win the North division and not be bowl eligible.

Aggies, don't go thinking your losing streak is too awesome. Iowa State hadn't won in Lincoln since 1977, but Nebraska turned the ball over 8 times (4 inside the ISU 5 yrd line) in their 9-7 loss to Iowa State Saturday. On second thought, this effort would go unnoticed if they were in the SEC. Outstanding defensive performance! 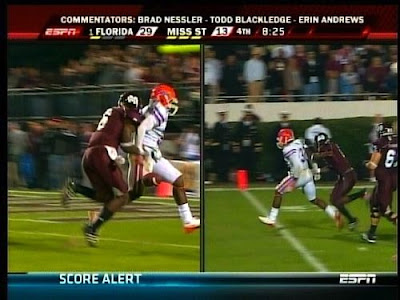 Here is the section where I refuse to rant about how terrible (and potentially criminal) the refs have been in the SEC this year. Not just we-don't-call-holding-in-the-Big12 bad, like we-are-"surprisingly"-making-bad-calls-that-benefit-our-best-teams bad.

I don't have any strong like or dislike of either Florida or 'Bama (although with half the league being SEC fans, you may), but Bama and Florida rank 80th and 84th in passing offense, respectively. 'Bama has only 2 offensive TDs in the past 3 games.

I wonder what it feels like to be an Iowa fan this year?


Back before he was a responsible father, I once went out bar hopping with Kirby and his Dad (who is arguably the REAL most interesting man in the world). After kicking back a few, responding to a young bride-to-be looking for some salt for her margarita that he had salt in his pants, but before his Dad ditched us so he could get his party on without us... Kirby threw a backwards dart in a bar (and dart room) chock full of people. This wasn't just a casual backward dart, this dart would have gone through a person if they had been in its path. The best part of the throw was that he did it without hesitation *and* it hit near the center of the board.

Kirby, this clip is for you...


via Deadspin: Sam Bradford Reminds You To Not Stay In School, Kids