The Dallas D-bags joined Justin's Team on top of the standings this week. I take back what I said a few weeks ago, Crystal (like her Red Raiders) do not have their mojo back. Don't feel back about that 6, Gary pulled a 4. I hate those weeks where if you would have picked the exact opposite then you would have had the highest score rather than the lowest score... ugh.


Let me get this out of the way early... the celebration rule, as it is enforced right now, is ridiculame at best and ridiculatarded when it changes the outcome of games. I'm not saying I was pulling for Georgia, but they got hosed... and no, the make up call didn't erase the damage already done. 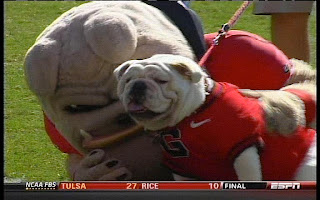 This is just about the cutest cute that ever cuted.
Nice job refs for spoiling the cute party!
Like Kool and the Gang said, "Celebrate good times. Come on!" 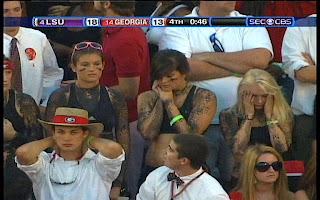 This celebration would not get penalized

If Boise St. or Notre Dame make it into a BCS game, the system must go away and never come back.


Anyone catch the "U Swag" Jacory Harris had buzzed in his hair? Iz da' U back or is blow-u that bad? I'm not the most impartial judge on this matter, but ou's offensive line is horrendous. And as good as I feel Venables is, someone needs to be blamed for the terrible use of some serious talent on D. Unfortunately, this depleted version of a Bob Stoops team will probably play 150% against Texas is Dallas... and lose in a close one (let's face it folks, they aren't *that* good ;)


If I gave a crap about West Coast football, this section might mention teams like Oregon, Cal, and USC... but I don't. But are their three teams in the same conference that had more undeserved hype than these three? Maybe the sooners and cowboys? Speaking of teams I don't care about, I read that FSU has lost four of its last five home games, with the lone win coming against a I-AA team (Jacksonville State). Ouch! 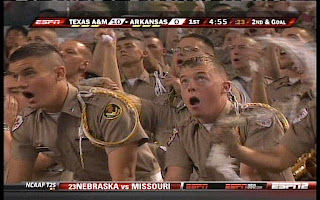 wewp! we r winnin'!
I kid the aggies. Seriously, I was rooting for the aggies. They are like your little brother. You want them to succeed, just not at your expense and by no means can they enjoy more success or attention than you are getting. But I love them like a little brother. The pigs, on the other hand, are like the jackass kid down the street that is always trying to build a tree fort bigger than yours or that schedules a party on the same day as yours and invites the same guests. I hate those fkrs.