Point summaries for Week 7:
Justin scored a pedestrian 8 correct picks last week. Kyle made a huge move toward the top with an 11. Cain no longer has the magic that propelled him to the Pick'em sweep last year. He is hanging out at the bottom.


It's easy for me to say "I'm not superstitious." It's a lot harder to actually never be superstitious. I am not saying that I am as superstitious as fellow Pick'em peep Curtis (he refused to pick 'Bama last year for the NCAA Championship bonus question because he didn't want to jinx it), but it is for this reason I like to stay relatively neutral during the week prior to a rivalry game.
--- JON, EYEMUFFS ---
Sure, Texas is a more talented team than OU. Sure, Mack Brown is an esteemed and respectful gentleman and not the total self centered paranoid douche that Stoops is. Of course Texas a more desirable place to live than Oklahoma. There is no question that Texas is a far superior educational institution than that of OU. And everyone knows why Texas doesn't float out into the ocean.

The difference is now... I can publish it. At 2:54 PM on October 17, 2009 -- nearly 4 hours after coverage started at 11:00 AM -- we all were reminded that ou still sucks. The Longhorns took care of business, albeit a little ugly, in the great --- KYLE, JON, EYEMUFFS --- unwelcoming chotch-bag magnet city of Dallas, Texas.

In fact, sometimes I even feel for our little buddies to the North. Okies are good, hardworking, simple, fried bologna eating dirt burglers just trying to make it in this world. They may genuinely hate me and my burnt orange family, but I'm OK those people. They love their school (or the flagship school in their state that they root for since college wasn't for them and/or there is nothing else to love about the state of Oklahoma). Take a look at these guys. Don't you want to have them over for dinner?

Forget about the fruity hand signals. I'm sure there has been something original to come out of the state of Oklahoma, I just couldn't find anything with a quick google search. At least they still have that awesome two word song.

Alright, that video was NOT what I thought it was going to be. Sorry about that one. That first video was genuine, but apparently the guy in the 2nd video wasn't a sooner fan at all... and the whole c*#ks%#ker thing is just not right. Okie's don't have to resort to that nonsense... I mean, not as long as there are still options at the family reunion. 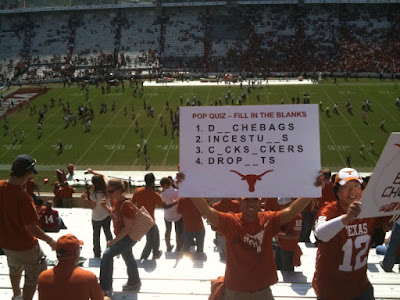 I'll probably lay low the week before Thanksgiving, but given the beatdown the agricultures took from K-State ("aggied" needs to be become a verb, like the Patriots aggied the Titans this week), it's probably just me being superstitious.

You can't even make this bleep up.

Just kidding the sooner, aggie, and dallas. I love you guys. *kiss*