The other team made more points than we did. Less points than opponent equals sucks! (A Northmen, ANo, +3). You do the math. -G

The university of Notre Dame hatched a super secret global conspiracy to take down the Longhorn Network. The reason, you ask? Because while THEY are the only school who has a sweetheart television deal, even they never thought of getting their own tv network. The audacity of those Longhorns. Of course they couldn't have done it without a secret weapon. No it wasn't the support of the vaunted and still bitter, university of nebraska. No it wasn't the vast might and reach of the Texas A&M aggies. It was the absolute and inexplicable inability of Mack Brown to coach a meaningful game against the Sooners. Mack Brown must die! Fred Akers we LOVE you!!!!!!! (Double D, DD, +4). I don't know about the last part, but the rest checks out. -G

I don't know, but it was so bad Big Tex had to end it all and take his own life. (Bevo XIV, DW, +3). RIP Big Tex. Can't wait for FrankenTex next year. And yes, I know that Dr. Frankenstein was the scientist and not the monster. -Frankenweenie

We're only playing with 8 guys on the field on defense, we have no linebackers. (One Man Wolf Pack, MF, +3). I like it when they all blitz the same gap. -G

Johnny Football has a deal with the SEC to make all Aggie games exciting, which in turn makes my life expectancy decrease due to stress.  Seriously though, what happened in Cotton Bowl last week? (The Chex Mixers, KW, +4). I don't know, but in case you didn't catch on, this is part of the self-prescribed therapy. -G

Our qb sucks with and without the mustache! Our O line sucks too. Can the defense just stay on the field and play offense as well? (The Mad Bomber, KZ, +4). You know how I can tell KZ's team isn't in the Big12? -G

I live for Sundays, and they sucked then too.
It was a blowout in every statistical category. There is no way they should have lost that game. It is hard to gain over 250 yards rushing and still lose! I mostly blame the coaching staff! They had the ball on the edge of field goal range with a timeout and managed to not run a single play. A couple more yards and Dan Bailey makes that kick! Stupid Dallas Cowboys, oh how I wish you were as good at winning as it looks like you should be on paper! (Replacement Picks, ANe, +4). There are high schoolers that haven't seen a successful Cowboy team in their lifetime. -G

Yeah they sucked, but you can't bring me down.
All is good now that Detroit swept the Yankees and are playing in the World Series. I won't allow Mack's ineptitude as a coach to interfere with my enjoyment of the Tigers' upcoming championship. (BlitzKrieg, RK, +3). I believe Vegas likes the Tigers. -G

NO NO NO  Both the school were my mama's money went and now the school where my money goes did OUT-O -SITE!  DY-NO-MITE! Bowwchickawowow~! (Beelzebubbles, CCo, +3). Bonus points for the ending. -G

Actually, my favorite team beat the piss out of Missouri in a driving rain storm. So no sucking here HOSS. RFT!!! (14 National Championships, CG, +2). I got it. 'Bama is really fkn good. rft. -G

Like hell they did. They beat the number 5 team in the nation with incredible defense and an unstoppable running game. If even two of the four field goals we kicked were TDs instead it would have been a fucking blowout. Now, YOUR team on the other hand... (Bourbon Street Bounty Hunters, JC, +3). I would have accepted "strong running game" or "really good running game." -G

You have me confused with one of the dumbasses in this league that didn't go to LSU. (Large Donkey IPA, KS, +4). My favorite of the LSU answers. -G

It's Obama's Fault.
Obama is President so he should take ultimate responsibility.  Elect Romney because he has a plan and he knows how to fix it. (SITKNM, JHa, +3). Nice try, Donkey. -G

tl/dr.
Don't know didn't watch as you can tell by my picks this year. (Chumlee Banditos, KP, +2). But think of all the other people in the league that aren't getting the arse whooping you handed us last year. -G

I'm from Oklahoma and I don't have much else to be proud of so here we go.
Did you not watch Trey Millard run, hurdle and stiff arm the Texas defense like the overrated 5 star recruits that they are! Last week rocked! Don't worry though horn fans you get the Baylor Bears this week. (Naked Bootleggers, JN, +3). It's worth noting here that Texas does not have anything to do with recruiting rankings. I'd say poorly developed and coached. -G

Given: My Favorite Team is Oklahoma.
Prove: My favorite team sucked last week

Statements:
1. My favorite team is Oklahoma
2. Oklahoma scored on their first drive
3. Oklahoma had the longest run for TD of the 107 game series.
4. Oklahoma had the longest pass for TD of the 107 game series.
5. Oklahoma had an awesome punt from Hunnicutt that was downed on UT's one yard line and Oklahoma tackled in the endzone for a safety.
6. Oklahoma scored a bunch more TD's
7. Oklahoma gained 677 yards of offense compared to UT 289 yards.
8. UT's 13 offensive points came after the 2nd and third stringers were in the game.
9. UT fans started leaving the game at halftime.
10. Big Tex was so embarrassed he committed suicide.
11. Did I mention the score? Oklahoma 63, Texas 21.
12. Oklahoma > UT
Therefore, the proof is false! That means Oklahoma kicked Texas's ass last week and Oklahoma does NOT suck!
BOOMER SOONER!
(TXH8R, DT, +5) Fact. -G 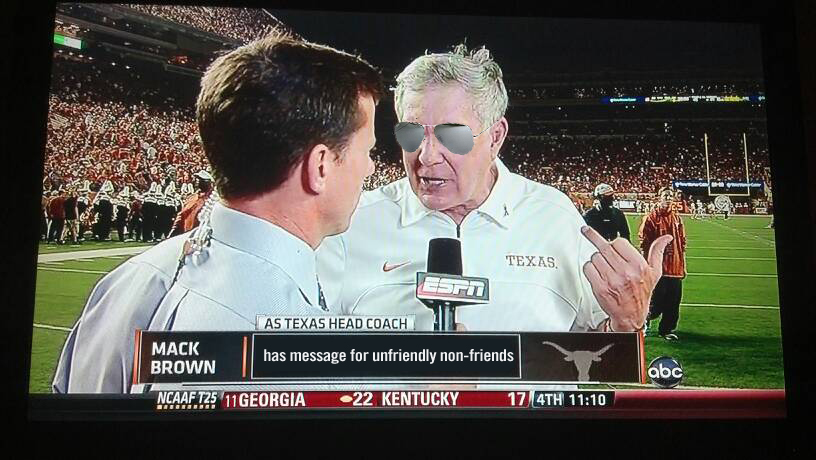 SCOREBOARD
We averaged 9.6/15 this week. No surprises? The Cincy/Toledo game statistically was the toughest on the card. So yes, I guess no surprises.

Looking at the board, aside from the top 3, Double D (DD) has the most impressive performance. Despite getting a 2 in Week 3, he is still picking 53% ATS and is only 8 points from the leader. Well done.