We now know Notre Dame picked up a huge win. But did they really need it that badly? You guys have answers to that, and I've posted them below.

But first, some administrative stuff.

Best Bests = (choose your risk) No winners. I'll tweak this for next week.

Open ended bonus question... answers are at the bottom of this post.

BlitzKrieg (RK) still holds the top spot, and TXH8R (DT) has slid into the two hole. Don't forget -- the top two spots in both the Pick'em Contests get payouts.

Glancing at the standings, it's interesting to see that league veteran, Kentucky resident, and perennial bottom dweller Kentucky Wildmen (GF) has creeped into the #4 slot. It's nice to see you back near the top again, friend. Very retro.

BONUS: Who needs the win worse, Notre Dame or Oklahoma?

* Oklahoma, If they lose it will hurt their BCS rankings to have too many losses. (A Northmen, ANo, +3). True. I also think that an ND team with equal losses always gets preference in BCS bowls.

* Oklahomie homie (Beelzebubbles, CCo, +2). Rhymes usually score extra, but I'm not feeling "oklahomie" unless you had somehow rhymed it with "domie" or "bologna."

* Oklahoma, because fuck Rudy. (Bourbon Street Bounty Hunters, JC, +3). I like that 100% of Johnson's bonus question answers have "fuck" in them. 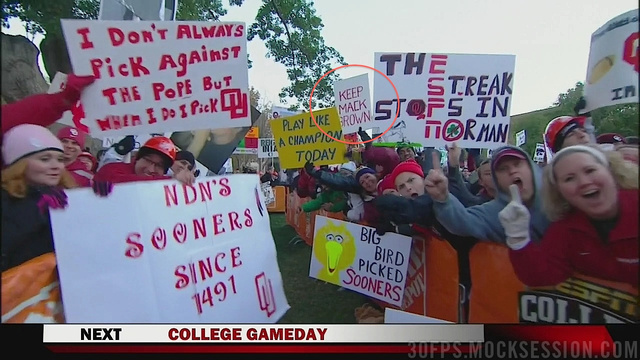 Oklahoma needs it -- or Notre Dame.
* If the goal is to win the National Title, OU needs the win worse. I don't see Kansas State losing two games. Historically, I would say Notre Dame needs the win worse. It would help confirm a return to the national stage. (Replacement Picks, ANe, +4). Uhhh, KSU still has Texas on the schedule. BCS SPOILER ALERT!!1! Yeah, just kidding.

* What kind of question is this? In order for either team to have a chance at the BCS, they need to win and others (Alabama, Florida, K-state & Oregon) to lose. Any loss now takes the team out of contention. (TXH8R, DT, +3). Sometimes it's not all about the BCS. FWIW, the question was aimed at getting a response. 95% of the time I  don't care what side the response lands on. Your answer doesn't suck.

Domers need it.
* Notre Dame...their season has been very emotional and they've been riding it. I don't think they'll be able to handle/recover from a loss...specially in a big game like this. (Gig'em!, AP, +4). Good point. They are emotionally unstable bastards.

* Notre Dame - they haven't been relevant in years, and here they sit undefeated in a  big game against a top opponent.  Will they be exposed as pretenders (yes), or are they actually good?  It's the next best test to actually playing an SEC team! (Chicainery, CCa, +3). -1 for sullying your answer with SEC nonsense.


* Notre Dame, they've run roughshod over the weak Big 10, a win over Oklahoma is critical to be considered a serious contender. OU loses and they still got BCS hopes by winning the conference. (Bevo XIV, DW, +3). KSU has Okie St, TCU, Baylor, and Texas left. I guess there is hope, but that's not where I'm putting my money. At press time of your comment, a loss to Tech was still a legit possibility.

* Notre Dame needs the win to get respect.  The only teams they have been beating are the down and out Big 10. (Kentucky Wildmen, GF, +3). Notre Dame's main problem is that they never get any respect. /sarcasm

Notre Dame, they need to prove they are an elite football program again...Oklahoma is always double digit wins with a fail in their major bowl games. (Pimp Possee, JBe, +3). What about Big Game Bob?

Notre Dame...when was the last time they were even in the discussion for the national championship? Hint...I was watching Thundercats...1988! (Chumlee Banditos, KP, +4). Ha! Like.

* FAVORITE ANSWER: Duh! Who needs a win more than the Catholic church. Not to mention that hunch back guy losing his girl friend. Notre Dame all the way. (Double D, DD, +5). !!!!!

Notre Dame, they have been the laughing stock of College FB for 10 years. Plus OU has almost won something...I mean sure they get waxed when the play SEC schools but who doesn't. It's just life and FB. (Large Donkey IPA, KS, +3). Facts are facts, I suppose.

Notre Dame absolutely must win this game if they want to continue to be considered a Top Ten team.  They're so hit and miss through the years that if they don't win today's game then Bob Stoops reputation of being one of the best coaches ever is perpetuated, the fighting Irish must stop this. But I don't think they will. (The Chex Mixers, KW, +4). Stoops has some magic, but the Big Game Bob thing is overblown. The vast majority of the time though, he gets it done.

Notre Dame, this win will officially put them back on the map. (One Man Wolf Pack, MF, +3). Print it.

Notre Dame. Although a second loss at home would reflect poorly on OU, they would at least be able to say they were to two top 5 teams. ND, however, needs to validate their re-arrival as a top program and winning in Norman would assist towards that end. It would not signify a return to their glory days, but it would give Brian Kelly the best win he has had in his 2.5 years in South Bend. Granted, that is not saying much considering that ND has only defeated two ranked teams during his tenure (#15 Utah in 2010 and #15 MSU last year), but I do think he has them on the right course. (BlitzKrieg, RK, +4). Wise breakdown.

* Golden Domers all the way. They ain't got shit in Oklahoma I can't get at Wal-Mart son. (14 National Championships, CG, +5). These are scored subjectively, so I don't need to explain myself here. I would like to note that 100% of Curtis' open ended bonus questions, spanning many years now, have contained the word "son." Love it.

Coach Kelly stated this week in his press conference that "Oklahoma is where we want to be as a program". So obviously the Irish need this win more then Oklahoma to take a step closer football perfection that is Oklahoma. And btw There Is Only One Oklahoma. (Naked Bootleggers, JN, +4). Absolutely right. We do not need anymore Oklahomas. The one is hardly tolerable.
ncaa results