By SirRon - October 12, 2012
Winning on Saturday is hard. You need a great plan and error free execution. That's why I make myself a TV guide on "home weekends" (not to be confused with weekends where my team is home and I'm out of town at the game).

I haven't shared one of these with you guys yet this year. 99% of the reason is that I'm usually just completing it as Corso is putting on the headgear. Going into a Red River Shootout weekend, I'm much more prepared.

Below is how I'll be winning this Saturday. It's just a game plan, so other than 11am-3pm, there may be audibles. If you don't live in Houston and have Comcast cable, then you'll have to ignore the channel numbers and deal with any regional broadcast differences.

You may also notice there is a selfish method to my selection of games on home weekends. I can handle four feeds to four televisions in the living room -- plus a computer. Unless sickness befalls me in the 1PM hour, I *will* watch all 15 games on the card. ncaa-on-tv--2012-10-13

Wherever you may be,
Whatever the time shall pass,
Sure as the sun shall rise,
Oklahoma... still sucks. 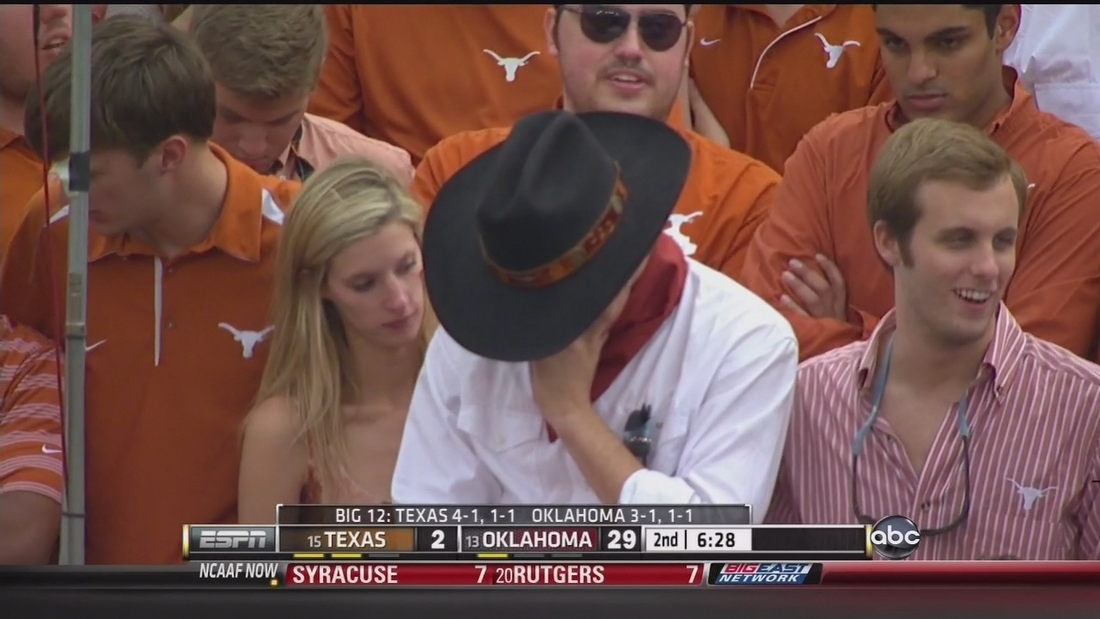 10/13/12 1:17 PM: 11AM kickoffs are coming out of half. Here is an update of games on the card.
#15 Texas Longhorns @ #13 Oklahoma Sooners -3.5: OU only sucks in things outside of this game. Prediction: Easy cover for the Crimson and Cream. Happy day for several of you. Bad day for me. 36-2, OU.
#6 Kansas State Wildcats -6.5 @ Iowa State Cyclones: Cyclones stepping up, as pundits predicted. 17-14 KSU. Still could go either way. Prediction: The home team gets a cover.
Alabama Birmingham Blazers @ Houston Cougars-13.5: I haven't been watching this TV carefully. 17-10 Houston. Prediction: Why not. I say UH will get there.
Auburn Tigers @ Mississippi Rebels -5.5: Auburn is probably the worst team in the SEC. Ole Miss got steamrolled by this sh!tty Texas team. Prediction: Auburn is worse than Texas. 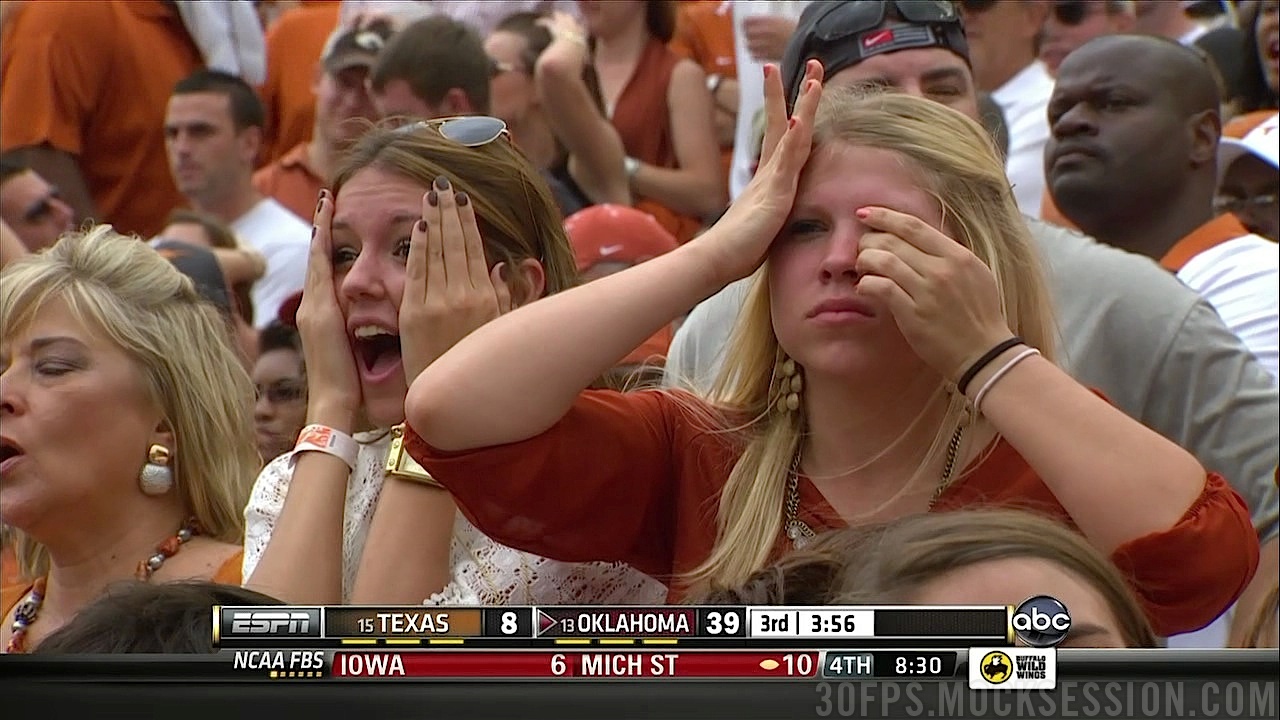 In case you missed it, that girl to the left said "FUCK!" and the girl to the right picked something off her face.

10/13/12 4:22 PM: Half time for 2:30PM kickoffs. Here is an update of games on the card.
#1 Alabama Crimson Tide -21.5@ Missouri Tigers: A rain delay almost gave Mizzou some divine mercy. But no, 'Bama still rolling, 28-7... this game isn't near halftime yet. Prediction: Alabama covers.
#17 Stanford Cardinal @ #7 Notre Dame Fighting Irish -7.5: Stanford is playing an okay game. Or, Notre Dame is not playing like they "are back." I don't know, and I haven't been very invested in the coverage. 10-3 Stanford. I'm going to predict that the "we're back" Notre Dame shows and they win by a TD. The Irish may not get that hook. Stanford covers.
Illinois Fighting Illini @ #25 Michigan Wolverines -23.5: I think we can all agree that Denard Robinson is back. Oh, what's that? He's overrated? He can run, and will run over this Illini team. 31-0 Michigan. They'll hold on and cover.
#5 West Virginia Mountaineers -3.5@ Texas Tech Red Raiders: WHERE THE FK IS THE DEFENSE IN TEH BIG XII??!1? Vegas was begging you to take TTech. I guess they knew something. 35-7 Tech. Prediction: I think WVU comes back (Holgo is pretty skilled at adjusting). I'm not going as far as calling a WVU cover. Tech holds on for the ATS and SU win.

10/13/12 6:48 PM: I'm late to updating the card because I was making klobasneks. Anything to avoid football highlights today.
#1 Alabama Crimson Tide -21.5@ Missouri Tigers: Predicted above that 'Bama would cover. No surprises here. 42-10, Alabama.
#17 Stanford Cardinal @ #7 Notre Dame Fighting Irish -7.5: "I'm going to predict that the "we're back" Notre Dame shows and they win by a TD. The Irish may not get that hook. Stanford covers." BOOM! I should go pro. 20-13, ND in OT.
Illinois Fighting Illini @ #25 Michigan Wolverines -23.5: Michigan 45-0. That's something. Just saying.
#5 West Virginia Mountaineers -3.5@ Texas Tech Red Raiders: The Mountaineers never found any momentum. Another way of looking at it is that the Red Raiders dominates. Tortillas for everybody!! 49-14, Tech.

Late Games: I got talked off of my own computer by my daughter for most of the late evening. Disney Fairy games are very un-Football Saturday. Sorry football gods.

Florida State covered easily, so I guess they are good, but not championship good? Vanderbilt couldn't surprise Florida, but it was a better game than the 31-17 score showed. Did anyone see Coach Boom punch that player in the chest in a moment of elation? Awesome. Wish I could find it online to post. I kind of watched the USC/Washington game. Mostly because I was pulling for Washington to keep it inside of 12.5. Nothing exciting there, except USC didn't cover. TCU rolled Baylor. Wow. Miss St... for real? Bad day for any coach wearing "UT." The Texas A&M game was interesting at the end. And the game of the week. Is it possible for a #3 vs. #9 game to be a little boring? Pretty good football though. Pretty good.
live blog ncaa tvguide