My picks were pretty lucky too. Lucky like this soccer attack.

It's the colors you have.
No need to be sad.
It really ain't that bad.

Scoreboard:
Chumlee's Banditos (KP) holds scoreboard after another double digit week (11). 67% ATS is insane, and only 4 weeks into this thing, he already has a 5 point lead over the next competitors.

As a league, we managed 60% ATS, so we could have collectively won a tiny bit of money in Vegas... just enough to cover the juice.


The SEC Tries Their Luck with 13 by Adding the Aggies:


Ghostface Killah - Back Like That (f. Ne-Yo)
I've read it was inevitable. Despite accepting Nebraska and Colorado's exit fees as a bribe and pledging their allegiance to the flag to the Big XII just last year, the Aggies completed a move their President said described as being in the works for a year and a half. To these eyes, the move doesn't make a lot of sense. Raise your hand if you've ever said anything Aggie related "made sense." Put your hand down Gig'em Baby (AP).

Deep down everyone wants their family members to succeed, even if selfishly we don't ever want them to be successful enough to make us jealous. Luckily in this case, that ain't hap'nin. The Agros will slot in the SEC somewhere in the Tennessee/Arkansas territory at best. In the BCS era, that means fading from national prominence. Texas A&M is unique though, because they never really knew what national prominence tasted like anyway (and you can't really miss what you never had). 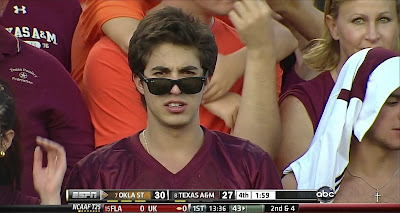 UPDATE: Hold Up, Maybe Only the Football Team is Going to the SEC:
At least that's what I learned from this (admittedly sweet) video