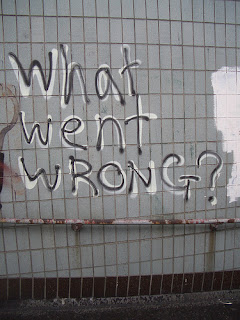 Northmen (ANo): I think the real question is....What didn't go wrong? The answer... at least the retractable roof still works! Poor Texans!! What else didn't go wrong you might ask?? The Cowboy's record! SWEET!
I think Schadenfreude is one of the best medicines for depression... and alcohol... but I'm not a doctor.
+4

Ferments-A-Lot (GN): My decisions were swift and sound. However, I was given bad advice.
Not taking blame is the American way.
+4

Bevo XIV (DW): I was turning left into BRC from the middle lane and the guy T-boned me. I agree. That is how it happened. -witness
+4

Novacain (CCa): Didn't watch enough football from Germany this year. It turns out that this makes a difference.
The oooooollllllllllld German excuse. Nice one.

The Nine-Five (A-C): My dad burned the pancakes.
Bummer, unless "burning the pancakes" is some sort of euphemism that I don't understand.
+4

Beelzebubbles (CCo): It all happened too fast.
Now I'm positive that this is some of euphemism that I don't understand.
+4

Dave's Bonus (DD): First it was that !@#$% burned turkey.  Then it was Roy Williams.  Need I say more?  And then the entire national sports media held a candlelight vigil because of one sideline bump out of bounds on Mickey Mouse... er Vick.  @#$%! And it all culminated with the cancellation of a football game because... wait for it... a few snow flakes in Philly.  Can you say Ice bowl !?!?  Seriously, wouldn't the world be better off with a few less Philidephians?
I feel you, but I'm the one that gets to ask the questions.
+4

One Man Wolfpack (MF): Tried to pick too many upsets.
Could have been worse.
+4

WhooDat4Life (Lo): Well for starters there has never been a season with 4 head coaches fired mid season....well and my Saints shouldn't have lost the bullshit games early in the season.  Still Superbowl bound. WHO DAT!.
Should have been 5 head coaches. Just *sneeTexanseeze* sayin'.
+4

BlitzKrieg (RK): For my team, it was what went right at the end of the year.  One of the best (if not the best) defensive lines in the NFL helped mask both the youth in the secondary and the multitude of non-drafted free-agents that manned the three starting LB spots much of the year.  On offense, the emergence of Brandon Pettigrew made our two tight end set -- along with a rotation of the sure handed Tony Scheffler and the excellent blocking Will Heller --  tough to defend against and assisted us in finally establishing a running game.  This in turn allowed our third and second string QBs additional time in the pocket to find Calvin Johnson and Nate Burleson downfield.  If Matt Stafford stays healthy next year, the Lions will contend for a playoff spot.  I think the Bears are fraudulent and the Vikings are on the decline.
For my team, I stuck around when they didn't draft hometown hero VY and chose instead to give an $8M bonus to David Carr. This year, after hanging on to Gary Kubiak and crew for a year too long, I'm gone. Free agent. I'm not hopping on the Lion's fan team though. Too much heartache.
+4

but if I were to pick a winner...
Large Donkey Circus (KS):

Well for some of us, it was Mack or a Lack of Colt,
For Others it was Les and JJ giving us a jolt,
People in Norman just all around blow,
And those Cowgirls spend a lot of dough.
No nothing went wrong, it was all as it seems,
The Saints coming off the season of dreams,
So Back to Back to the bowl they sail,
As I sit back and drink my Two Hearted Ale.