Point summaries for Week 10:
Kirby isn't intimidated by Cain. His double digit performance this week (10 of 13) brings him within 1 pt of the top spot.

VY is 2-0 as a starter this year. What has changed on this team besides the starting QB? (signed - Vince Young has healing powers)


Speaking of winning QB's, Romo is getting the job done this year. The game got Al Michaels all phlegm-y


I don't know what everyone's opinion is on Chad Ochocinco's skylarkings, but I enjoy it... the latest bribing of the refs was entertaining, and in the end, isn't that what we are paying these guys the big bucks for? 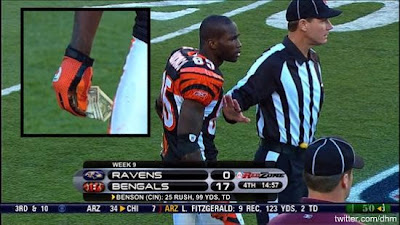 Football is hard:
Here is the scene. It is the forth play of the game. Arizona Cardinals lineman Deuce Lutui gets too football-y with Chicago Bears tackle Tommie Harris. So of course, Harris punches him in the facemask. In the epic battle between hand and facemask, I'm going to take facemask. Genius.

That dude's son plays high school football. He shows up for the big tackle around the 0:19 mark.

Redskins cornerback DeAngelo Hall says Atlanta coach Mike Smith cursed at him and a Falcons assistant tried to "get some licks in" during a sideline melee in Sunday's game. Hall said he plans to file a complaint with NFL Commissioner Roger Goodell that Smith "cussed me out" and Falcons director of athletic performance Jeff Fish and others "put their hands on me."

File a complaint? For getting cussed at? Seriously!? I thought the proper way to handle a diss was with handguns. I just can't keep up with the kids these days.

I ripped this picture right from The Sports Hernia because it made me laugh. 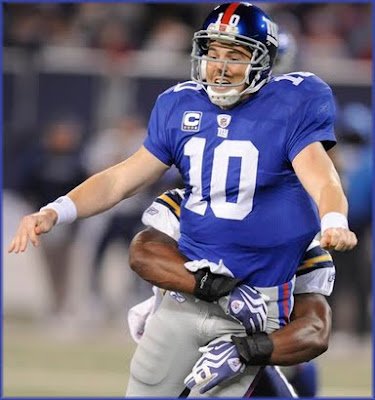