By SirRon - November 10, 2016
Commish: Alright alright! Ask me anything. Let’s get this started.
Alexandria Cyclones (SS): What motivates you?
Commish: Impressing someone with something they weren’t expecting.

Talks to Animals (JD): Why the heck isn't pickem legal to play for money? you could fill out your slips at the lotto machine!Commish: I’m for it. We could play at the Astrodome Casino.
Big Papa's Picks (AM): So we get 1/2 a point for a tie in the NFL?
Commish: Nope. There clearly shouldn’t be ties in football. All ties should be decided by a place kicking competition between the two teams’ offensive lineman. So that’s not on me. That’s on Goodell.
Bevo XV (DW): What would it take for Baylor ban to end?
Commish: NCAA sanctions, admission of guilt, or a majority league vote to bring them back -- whichever comes first.
A Northmen (AN): I got nothing. I know all the answers ;-)
Commish: What is “how I feel all the time”? And what else?
Creekside Body Count (KH): Erin Andrews or Sam Ponder?
Commish: Erin Andrews every day of the week and twice through the peephole.
Swamp Dogs (DR): What equation do you use to formulate which games make the cut each week?
Phlying Hellfish (AD): How are the NCAA games chosen?
Commish: Excellent question. First of all, I usually try to avoid non-Saturday NCAA games. The only exceptions are the first week, the last week, and any holiday weeks. I also try to work in teams that people in the league like (based on your answers on the registration form). After that, the card depends on my Longhorn season ticket package. If it is a Longhorn home game weekend, then I'll be out of town, and I scan for what look like good match-ups or games with interesting lines. I do my best to balance the card with games across all time slots, including at least one West Coast after dark game. However if the Longhorns are on the road, my method is even more calculated. In my living room I have five TVs. Three of those TVs get an HD feed and two are only crappy TVs that can only get basic channels. The rule when I'm going to be home is that I want to watch every game on my TVs. To accomplish this, I can’t have more than three games in any time slot that aren’t on a non-HD channel (because of my two crappy TVs, and no more than five total games on at any time. Finally, I prefer to back load the card so that much of the action happens at night. Pretty simple actually.
Beelzebubbles (CCo): When will you mark me as paid and send out my form of payment to the team?
Commish: Here is your receipt. The sweet-ass-‘stashed Lost Cause (JH) picture. 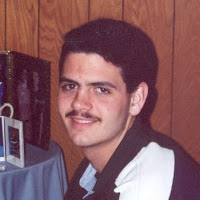 One Little, Two Little, Three Little Donkeys (KS): Who is the worst pickem participant since you have started this amazing contest?
Commish: Metaphorically or literally? Maybe that ‘stashe above. But not literally.
Siemian's Stallions (MM): Given the Cubs win this weekend and the long lineage of pick'am Champions what has been the longest championship dry spell in pick'em.
Commish: Possibly 'stashe's cousin, Beelzebubbles (CCo), who hasn’t won since 2003.
Butt Pickers (ANe): Who has the best career pick-em score?
Commish: In 2011, I picker named Chumlee's Banditos finished the NCAA season with 61.4% against the spread. In 2009 Creekside Body Count (KH), then Mr Smokeypants, finished the NFL season with 71.5% (183) correct picks . As a comparison, last year’s winners won with 57% against the spread and 160 correct picks in the NCAA and NFL contests respectively.
I Look Good On Top (BF): Why don't the scores post immediately after each game ends?
Commish: This answer is nuanced. It all depends on the availability and state of mind of the guy on the other end of the scorecard. Somebody has the low pay / no pay job of entering all the scores manually.
Gig'em (AP): When did you start pickem-football and how many participants were there the 1st year?
Commish: The first official year for this pick’em game was 2000. We had 7 participants. Creekside Body Count (KH), then named Second to Nut, won the NCAA contest picking 51.5% against the spread (haha, tough competition then). A Northmen (ANo), then #1 Stunners, won the NFL contest picking 66.8% straight up.

Lost Cause: How much longer do you plan to host the game?
Commish: Until I turn in a set of perfect cards for a weekend. Then I shut it down THAT WEEKEND and return all your money. For those of you curious about our history of perfect cards, this is the last one from 10/29/13.
The Northmen (ANo) filed a perfect NFL card this week -- a truly rare feat. I googled my email and found that our last perfect card was, like, a whole year ago (10/22/12, One Man Wolfpack (MF), NFL Week 8). Before that Monday Night game, I apparently did some P-F history research and wrote the following:
Speaking of correct picks, a perfect card is nearly impossible. One of you old-timers can correct me if I'm wrong, but I only remember it happening twice ever. The most impressive of the two was Northmen's (ANo) perfect weekend, where she correctly picked 15 NCAA games and a full slate of NFL games (16). Mr. Smokeypants almost lived out a little league version of this feat this week. Smokeypants capitalized on an abbreviated card (I accidentally left off one game) during the bye-week part of the NFL schedule and had 11 of 11 picks correct going into the HUGE Ravens-Jags game. Unfortunately he got Flacco'ed.
Pick'em recorded history isn't without its holes, but I could only find 2 NCAA perfect cards and 2 NFL perfect cards. A Northmen's (ANo) perfect weekend was insane and will probably never be matched. She also has the other recorded perfect NCAA card. The 2nd perfect NFL card was by someone not in the league anymore.
We have had 6 perfect cards in the 14 year history of the league, 2 NCAA and 4 NFL. Northmen have 4 of those 6, including the only two ever in NCAA against the spread. That is Hall of Fame bleep right there.
Crigga88 (CF): What do you think about the Aggies at #4

Commish: I think they are going to lose. Really though, I can enjoy watching the Aggies now that they are the SEC’s problem.

Accidentchild (MN): What is the meaning of pickem football?

Commish: “Pick’em” is a style of game and football is the sport we are picking. Strangely enough, no one ever registered that website name, so now it is mine. Ours.

16 National Championships (CG): How many people have paid you?

Dirt Burglars (DT): G...Are you skimming something of the top? It sure is a lot of work every week to do it for nothing. Plus you got all those jack asses that don't pay until the end.

Commish: I don’t skim anything. This all makes the football season 10x more fun, even though it is 100x more work than a football fan normally signs up for.

Commish: Let’s talk about the strange tradition of tipping extra around Christmas? I don’t get my hair cut in December because Christmas tipping is stupid, but I hate the pressure of having to do it. In December, no one cuts my hair.

One man Wolfpack (MF): Without football, what would we have to look forward to every year?

InnocentBystander (BJ): How will the payout work? ...not that I'll be winning anything.

Huntwick Hosers (KW): Tell the story how you dreamed to create a perfect pick-em league.

Commish: During my second senior year of college, one of the news stations in Austin had a contest where you download a card and send your picks for prizes. Amanda and I started doing it, then figured out it was just as fun to do it without sending the card in. After I got my first job, I floated a similar idea to several people and just started doing it. In 2000, the cards looked like below, I entered, formatted, and tallied everything by hand. Seventeen years later the process is so much cooler, but the game is just as friggin fun. 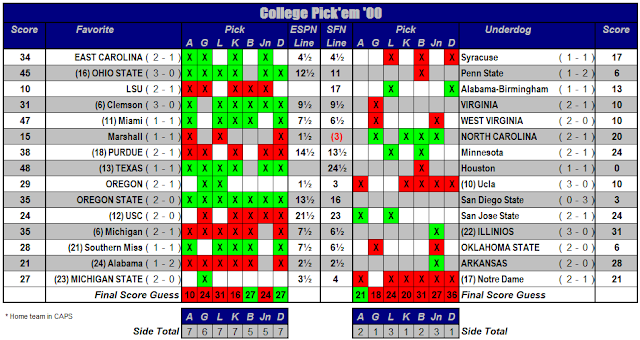 Shake and Baker (JN): Has anyone ever won both nfl and ncaa pickem in the same year?

The Velvet Neutral Ground (JC): How high will I rise in the standings after LSU upsets the Gumps this weekend?