P-F16: Week 4 NCAA Bonus: How many points do the Longhorns give up in the bye week? 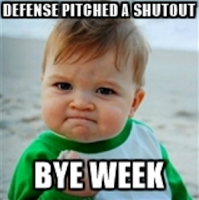 How many points would the Longhorns give up in the bye week? Who knows, but opening up your end zone to the opposition is definitely not against Charlie's core values.

I could tell that not all of you guys like the open ended nonsensical bonus questions, but I'm using my commissioner powers to give some of you points beyond the stated 2 points for answering. The answers came in some basic categories.

CLARIFICATIONS:
Cactie (DCo): Huh!!!!! The question is how many points do the Longhorns give up in the bye week. Since it is the bye week, you would think that the correct answer would be zero, but if you saw the box score on any of the recent games, it appears that teams are still scoring even as I type this post! +2

Huntwick Hosers (KW): Loaded question, my answer is purple. Better question, how many will the Purple Wizard score on this D in Manhattan, Kansas. But also no, this question is not loaded. +2

Gig'em (AP): Depends on how many more starters get arrested this weekend. The answer is zero. Zero more staters got arrested. +2

General Wartz (JM): Are they home or away? They are all at home, except one player. +2

For anyone looking to lay down money on the next bye week, for those that guessed numbers, the average was just under two touchdowns. Take the over.

YEAH BUT YOUR TEAM SUCKS:
Slay All Day (CK): Who cares. OU SUCKS. OU does suck a lot, but not as much as I want them to at football. +2

Tannesaurus Rex (CT): 18 ethics points for covering up a concussion. Uh nice one. +2

Phlying Hellfish (AD): Less than Texas Tech, barely. Tech also had a bye week, so this may have been the unintentionally funny response of the week! +3

Crigga88 (CR): Who cares about the trash longhorns!! Gig Em Aggies. I'm sure you didn't get a chance to check since your dick was so wet with hog. +3

DEE FENCE!:
A Northmen (AN): 3. The defence is being worked pretty hard in practice. Yeah the defense is getting worked. AMIRITE?! +3

InnocentBystander (BJ): They find themselves in a defensive struggle where the defense struggles mightily. That's the general narrative unfortunately. +3

KENT PERKINS FELL ASLEEP IN A DRIVE THRU, WAS WOKEN, AND THEN FELL ASLEEP AGAIN AND CRASHED HIS CAR
Maybe the question should have been, how many vodka drinks does it take to put a 320 lb man's BAC over twice the legal limit? But remember, the question was "How many points do the Longhorns give up in the bye week?"


16 National Championships (CG): I'm just praying for no arrests. Oh, I may have some bad news. +2

Lost Cause (JH): 1.2 points on the breathalyzer. I've never blown *knock on wood*, but I think that is too many breathalyzer points. +3