By SirRon - November 30, 2008
The Texans play on Monday and I'll probably be spending the day waiting to be disappointed by polls consisting of ballots cast by non-football experts, how 'bout a little live blogging (we'll see how long this lasts).

~8:30-11:00: I've spent the morning avoiding NFL talk and trying to find shows on TV talking college football. It seems most TV guys like Texas. I'm not sure if that pisses me off more or not. TBD.

11:00AM: Eh... no more college football talk. Time to hit up the TiVo for entertainment. Survivor time.

11:01AM: WTF! recap show!? Recap shows blow, even if they do show some extra footage. Whatever. Thanks for nothing CBS.

12:02PM: My disinterest in the Survivor recap has led to a lot of pausing and leaving the room. It's still on as the games are kicking off. Bleep it... I'm finishing this crappy recap show. Good thing I have 4 TVs in the living room right now.

12:07PM: Oh yeah... I forgot to mention the Plax story. Can someone explain to me why sports stars think they need to bring a gun to a club? Too bad the bullet didn't hit anything fun. Speaking of missing some news. I was surfing around last night and noticed that the terrorist attacks in India was not on CNN's list of top stories. Nice one Ted Turner.

12:17PM: The AP moved Texas ahead of OU... for whatever that is worth.
http://sports.espn.go.com/ncf/rankings?pollId=1

I love you Cain, but there is a wall.

2:12PM: I had to do some cleaning and rearranging to prepare for a xmas tree... let's see what I missed. The Giants are for real. Indy/Cleveland 3-6?? The Packers just tied it up. You know who else is for real? The Titans... or does anybody outside of Nashville really believe in the Titans. I'm not sure I do, but I can tell you why they are so successful: Vince Young. He's got healing power. He's magic. He's Superman. Laughing yet? Seriously, he's like Superman. He makes great things happen and then just sits back as Clark Kent going: "golly gee Lois." Vince on the sideline alone may win the Titans a championship. Stop laughing. I ain't kidding.

3:13PM: Bleep bleep it Green Bay! You know what? Beat it cheese! You want great cheese folks. How about some Maytag. That's made in Iowa. Want a cheddar flavorgasm? Try Tillamook. They make that in Oregon and it one of the best cheddars you can put in your mouth. Beat it Green Bay... you cost me the lead... and there is that cheese thing. 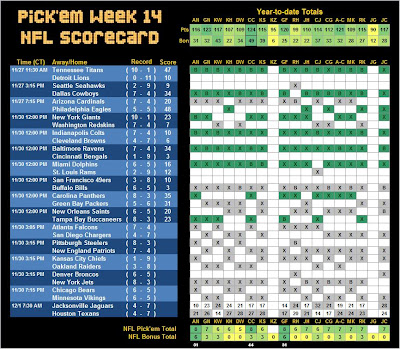 Although, Matt Cassel's QBing (word?) is impressive. But off to a small TV with closed captioning on with you Matt.

6:43PM: Bleep bleep it left coast! You know what? Beat it California! And by the way, your food sucks. All your froo froo cake boy ingredients and small portions. It's not cool. It's just not good. And thanks for charging me twice as much for half as good and four times the suck. Beat it Chargers. ... you cost me another point from the lead... and there is that crappy food thing. 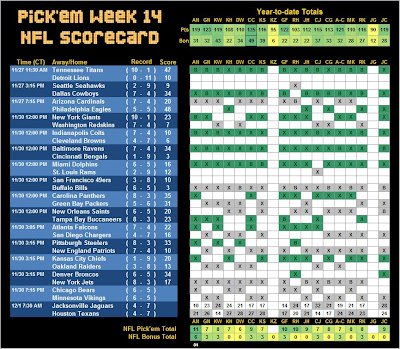 10:41PM: An It's Always Sunny in Philadelphia, Amazing Race, and The Shield later... here's the final update of the day. 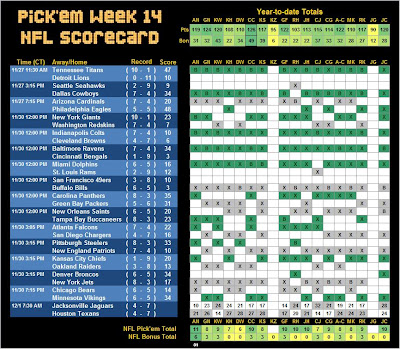