It's post season time. Be honest with me, you can't say the word "playoffs" in your head without saying "PLAYOFFS!" (Jim Mora style). Be honest.

Screw Houston or New Orleans, it is the year of the Tebow, until further notice.

Week 1 Score Update:
If I refer to you as KSc, SS, or GN, then you probably wish you had joined the quarter plus percent of the league that failed to make a pick in the first round of the NFL playoffs. Despite losing our Pick'em mortgage, this weekend provided some compelling football games (ignoring that egg that the dirty birds laid on offense).

Three of you guys picked 100% against the spread (CCa, CG, ANe). Of the three, only SEC Rejects (ANe) embraced a bet-big/win-big strategy and went all in for Week 1. The Pick'em house takes no juice, so ANe doubled his money and leads the league going into Week 2. DD and KH also did quite well at the Pick'em Casino this weekend.

I don't know if I even like Denver or Tebow, but I'm fascinated by the story. I'm curious, how many points would someone have to give you before you put REAL money on Denver vs New England? Two scores at least, right? Before you guys get all fundamentalist on me, Jesus clearly doesn't pull for Roethlisberger. You could have taken that on the moneyline. But what about Brady? He didn't get all those gifts he has with just hard work. Uh, obviously he was gifted most of it. Should be interesting this weekend. Just saying.

...As should every game in Week 2 of the NFL Playoffs. Saints. Texans. Defending Champs vs baby Manning. The Jesuses. Unless you are an atheist Cowboys fan, you are going to have a Pitbull-ish Dr Pepper-like real good time. The NFL Playoff Week 2 - Divisional Playoffs card will get sent around Wednesday morning.

Loser has to get a worse tattoo than this one. 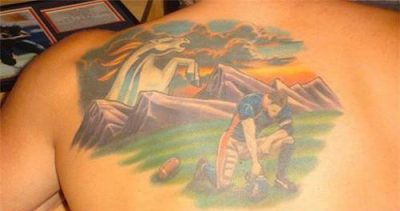 Seriously? No more who dat? No more Chosen One*? No more Jacoby punt returns? No more discount double check?

I knew I should have worn my VY Texans jersey.

*Brady may actually be the more divinely gifted one.