12/31/11 2:31 PM Update: This is a continuation of the previous post. I will no longer update the card on Part 1 of this Bowl Pick'em Challenge. However, if you want to relive the excitement, mouse click on this here highlighted text.

The bowl card is a beast... click the picture to bring up a larger version. 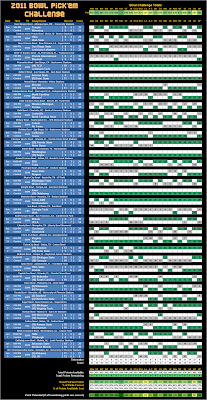 What I learned after these games... Ags halftime line was A&M -4.5. Ahahahahaha. Sucker bet.

What I learned after these games... Jay Paterno after the game when asked about his Dad: "He has always done what is right." Terrible. Congrats to the Coogs on an amazing season. It'll take Sumlin a solid 2 years to get another 12 wins.

Of course Nebraska lost. They are in the Big Ten now. In other news, Ohio State lost... also Big Ten. Penn State and Michigan State too. Also grass is green.


What the Bowl Challenge points look like after these games... A lot as changed in the middle, but the top is still KP (actual lead, fairly commanding) and KSc (math lead). KP's picking percentage is a sick 79%.

*update: By the end of the 3OT UGA/MSU game, KP took both leads and is picking with 81% accuracy. Uh oh.


If picking the nose and eating the booger videos are wrong, then I don't want to be right.

What I learned after these games... What a fantastic day of football. If you missed any part of it, then 1.) Nothing I say here will help you relive it, and 2.) You probably have a life and didn't watch football all day. (Hey, I went to the zoo in the morning. That's something.) For most of Monday, I was glued to the action like this Oregon fan.

What the Bowl Challenge points look like after these games... *GASP* Chumlee's Banditos missed his Rose and Fiesta picks, which allowed Large Donkey IPA (KSc) to edge slightly closer to his total points and take back control of the mythical mathematical lead. For those of you NOT scoring at home, KP will benefit more by MISSING his Sugar Bowl pick (pick = Michigan). KSc put 28 points on Michigan and will control his own destiny if he gets the pick correct. KP controls his own destiny with a Virginia Tech win.

What I learned after these games... This was a terrible game. Am I supposed to like this game because the score was close?! No one was there. Neither team deserved the invite to what should be a marquee matchup. This game did more for a playoff than Death to the BCS. OK, I exaggerate... but not about the game sucking.


What the Bowl Challenge points look like after these games... As stated above, Large Donkey IPA (KSc) now controls his own destiny.

More importantly, I found a way that I can win. I need: WVU, Arky, Pit, and No Ill. Just thought you would be interested :)

KSc can win by winning out or by getting the next 3 and missing his 2nd to last pick: Clemson, Arky, Pit, Arky St (BCS Championship wouldn't matter).

The quickest route to a Bowl Challenge Contest win occurs if WVU and Kansas State win the next two games. KP will lock up the win with 3 bowl games remaining in this scenario.

If there are other winning scenarios, then I'm too tired to figure them out.

What the Bowl Challenge points look like after this game... Check it.

What I learned after this game... This game made me sick. It was a real snoozer. What I really mean is that I was puking my guts yesterday (think projectile) and didn't get any sleep the night before. Therefore, I learned two things this game. 1) Throwing up after drinking too much makes you feel like Superman, and throwing up when you are sick also makes you feel like Superman... like Superman wearing a suit made of kryptonite. 2) Given my previously described condition, if you take one short blink during a commercial in the 2nd half, you end up opening your eyes again at 1:00 AM. Damnit.

Arkansas looked like the better team when I was watching. Apparently they won.

What the Bowl Challenge points look like after this game... Getting closer.