By SirRon January 03, 2009
I'm outside brewing today, but I'll start getting the playoff stuff up while I'm working... sorry if it doesn't make it by the first kickoff. 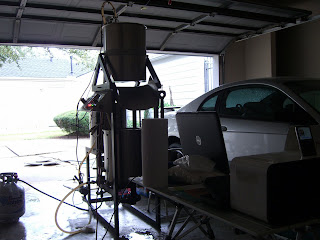 12:05PM update: damn... still getting everything clean and set up.

3:02PM update: Ahh yeah. Mash-in done. (For everyone not named Kyle) that's when the grain soaks in hot water to pull the sugars out. Smells like bread up in the garage. The compiled playoff card is in progress and should be up soon.

3:39PM update: Well the card is up... kinda. I am still searching for a few cards and all the formulas don't work yet.

6:06PM update: Still brewing... It's a 10gal batch of Grand Cru for whoever is interested. Ugh... so much to clean. I think there is a collelation between motivation to clean and number and beers drank. Motivation trends proportionally down with beer #.

7:14PM update: Sorry Gary... you were on the wrong side of Kurt Warner's owning of the Falcons. I guess those historical statistics come through sometimes. I think the formulas are all working on the card now. I'll confirm when I'm not outside drinking and brewing.

9:00PM update: Brew day is over, so I'm switching over to the "Official Post"